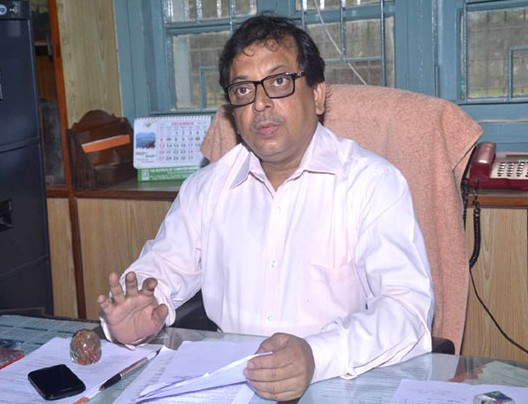 Named after Rev. Charles Freer Andrews (1871-1940), the renowned Christian missionary, educationist, and philanthropist, Dinabandhu Andrews College, which has now become a premier institution of higher learning situated on the southern fringes of Kolkata, was founded in 1956 by an order of the Government of India with the object of facilitating the access to higher education for the children of the uprooted families from erstwhile East Pakistan (presently Bangladesh) who had settled, among other places, at Garia and its vicinity in the aftermath of the Partition of 1947. The college started with only about 500 students and 50 teachers. The subjects taught were chiefly of the humanities. With the passage of time other subjects, including those of commerce and sciences, were introduced, and the number of students as well as of teachers increased. At present, the college has more than 4000 students on its rolls, and the number of teachers serving at it is 94 including 27 State-Aided College Teachers (SACTs).

While not deviating from its initial and primary aim of providing the opportunity of higher education for the disadvantaged sections of society, the mission of the college is to make, within its limited means, knowledge acquired through higher education reach every deserving school pass out who aspires to take admission to this institution and instill in him/ her a spirit of free inquiry, thereby broadening the scope of higher learning on the one hand, and to help in every possible way students who are needy so that they can carry on and complete their studies and be able to stand on their own feet as responsible citizens on the other. That the college has not failed on this count is amply proved by the fact that many of its alumni and alumnae have made their mark on different spheres of social, cultural, and educational activities as well as by the fact that the number of students coming from underprivileged segments who enroll themselves here has increased phenomenally over the years.

It won’t be off the mark to say that it is in recognition of this role the college has been playing since inception that the Government of West Bengal has recently sanctioned a substantial amount as grant for the erection of a new academic building on the premises of the institution to further widen the scope of higher education under its auspices. We appreciate the gesture, which is at once magnanimous and encouraging, of the state government, and we shall try to do our best to be true to the trust reposed in us and shall keep up the standards that have already been set. It is a special pleasure for us to say that the said building has come up and that it will start functioning soon. In addition, to keep pace with the demands of changing times, a program of computerization along with digitization of records has been initiated, and the work on this is progressing to our satisfaction.

A fast rate of growth of population along with rapid urbanization has altered the composition of the population of the locality over the past 50 years. Coupled with this is the increased accessibility that the college gained with the opening up of the Eastern Metropolitan Bye-pass and the extension of Metro Rail services to Garia. This is reflected in the background profile of the students, as a sizable number of them now come from urban, middle-class milieu. The mission of the college, however, remains the same as before.

To sum up, we envision a future wherein, through our untiring efforts and collective endeavors, our institution will attain a still higher place in the arena of learning and emerge as a beacon to the aspirants for quality education not only in Kolkata but also in the state as a whole. At the same time, we do hope that our students – former, present, and future – will play no lesser a role in raising their alma mater to a position of glory by making their own contribution to the process. And the journey begun way back in 1956 shall continue…